Summer time ended with a vengeance yesterday as the region awoke to winter and snow. ‘

As the clocks went back the snow fell, closing some roads and carpeting the Dales like an early Christmas card.

Amateur weatherman William Foggitt of Thirsk said it was the coldest start to winter in the region since 1910 and heralded a good chance of a white Christmas.

Up to three or four inches fell on some of the higher ground yesterday. In other places heavy rain fell.

The trans-Pennine A66 Scotch Corner to Penrith road and the A59 at Blubberhouses, near Harrogate, were closed for a time and Durham Police reported problems on the A68, where there were numerous minor accidents.

Their usual eight or nine Al motorway calls on a Sunday morning shot up to 23 by 1lam as motorists lost power due to water on the motorway.

Weathermen were. criticised by some motorists who claimed there was no warning.

Peter Ford, from Faverdale Road, Darlington, was forced to turn back on the A66.

“I had booked a hotel in Keswick but there was no way I could have
made it there,” he said. “My weekend was spoiled. If I had known I would have stayed at home.” 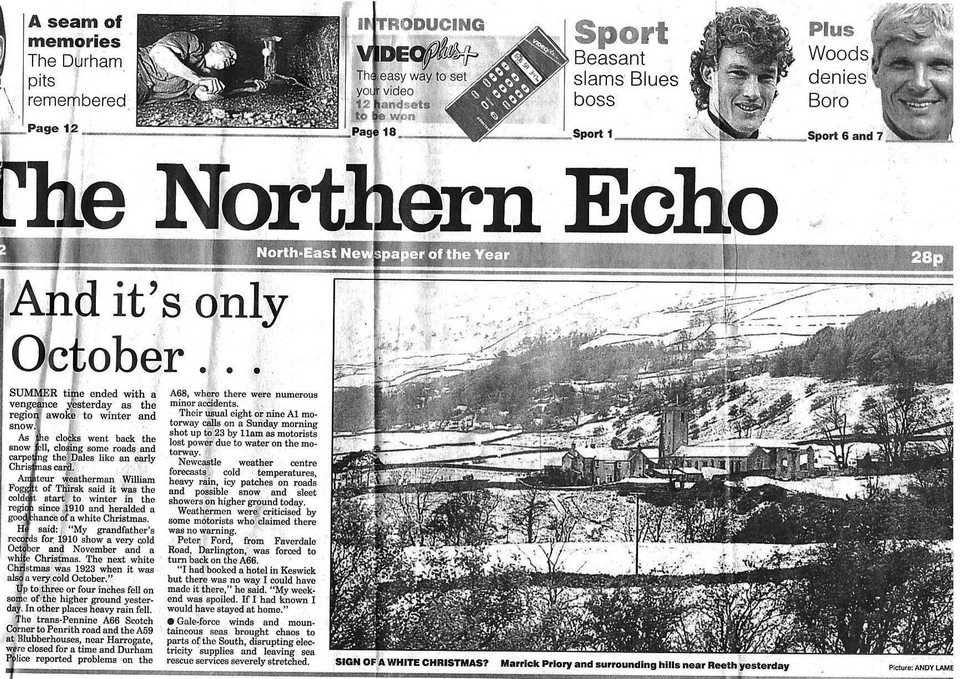 Marrick Priory is a historic 12th century medieval building that was developed in the 1970s into an Outdoor Education and Residential Centre.  It is situated in Swaledale in the heart of the beautiful Yorkshire Dales National Park and welcomes groups of visitors from all over the world. The Priory is licensed to provide a wide range of adventurous activities and can be booked on a day or residential … END_OF_DOCUMENT_TOKEN_TO_BE_REPLACED