Plans for the Centre

Here once a small community of Benedictine nuns, worshipped and lived, there will soon be young people enjoying a visit to Marrick Adventure Centre and revelling in the outdoor pursuits of climbing, canoeing and fell-walking in magnificent Swaledale.

For many years Marrick Priory church, eight miles from picturesque Richmond, seemed so neglected that many people complained about “its disgraceful state,” but did nothing to help remedy it. Now the church, set near the old priory ruins, has a
new role to play as a young people’s adventure centre, run by the diocese of Ripon but available to any parties of young people from the North-East.

It is visualised that leaders will bring parties of sixteen or more in number to Marrick for almost any residential purpose – adventure courses, field training, lightweight camping, holidays, apprentice training courses, groups from industry – in fact all types of training weekends and weeks – thus adding a new chapter to Marrick’s history and usefulness.

The site has played its part in English history. There is the shaft of a Saxon cross that stood there before William the Conqueror’s time. Then, in 1144, Roger de Aske built a priory for a small community of Benedictine nuns. This community was dispersed
at the dissolution of the monasteries. H. F. M. Prescott’s novel, The Man on a Donkey, gives a wonderful account of Marrick at this time.

Years passed, and the priory became a ruin. In 1811 the church was rebuilt to act as the parish church of the village, though it still contained many ancient features. A chapel-of-ease was built in 1893 because the priory church was so far from the village. In time the latter fell into disrepair.

Almost sixty years passed. Times changed. More emphasis began to be placed on training centres for young people. The then Archdeacon of Richmond, Archdeacon Graham, was fired with the idea of transforming Marnick priory church into a. residential youth centre. In 1961 a deed was enacted closing the church and placing it, with the whole site, in the hands of four trustees.

Plans for the centre were drawn up by Mr. George Pace, the well-known York architect who has been responsible for many church restorations and whose other work includes Scargill House, Kettlewell.

The plans for Marrick included converting the existing church into a two-storey building comprising dining-room-cum-common room,small discussion room, furnished chapel and kitchen on the ground floor. The dormitories have accommodation for thirty young people. The boys’ and girls’ dormitories each have their own staircase from the ground floor. The extension, built on to the old church, is in keeping with its aspect and contains the drying room, showers, toilets, and a warden’s room for the use of adult leaders of the groups using Marrick.

At first it was estimated that £50,000 would cover the conversion and building; half of this was promised by the Department of Education and Science. The remaining £25,000 had to be raised by an appeals committee with Sir Rupert Hart-Davis as chairman. This amount has been raised, though rising costs have meant that a thousand or two more will now be needed. No capital grant aid was given by the North Riding or any local authority, even though this is a regional project.

Increased costs have not been the only snag encountered by the management committee. It was hoped to open the adventure centre last Easter, but various difficulties delayed matters. It has now been decided by the trustees and the management committee to accept no bookings until Easter, 1970, though brochures have been prepared giving details of the centre and its facilities.

“We hope to be in full swing next year” states the Rev. M. S. Fargus, the Bishop of Ripon’s youth adviser for the Richmond Archdeaconry and Rector of Kirby Wiske, Thirsk, who is in charge of the scheme.

The brochure points out that all parties must be in the care of responsible leaders who will plan their own programmes. The charge for accommodation, including breakfast and evening meal and packed lunch will be in the region of 27s, 6d. each day. It is hoped that the centre will be used most of the year to help the cost of maintaining it.

Marrick Priory awaits a new chapter of its history, when it will be used not merely by young people from churches or allied organisations but by parties from other walks of life (including industry) who will benefit and enjoy the time passed in this beautiful part of Swaledale, not very far from the Pennine Way. 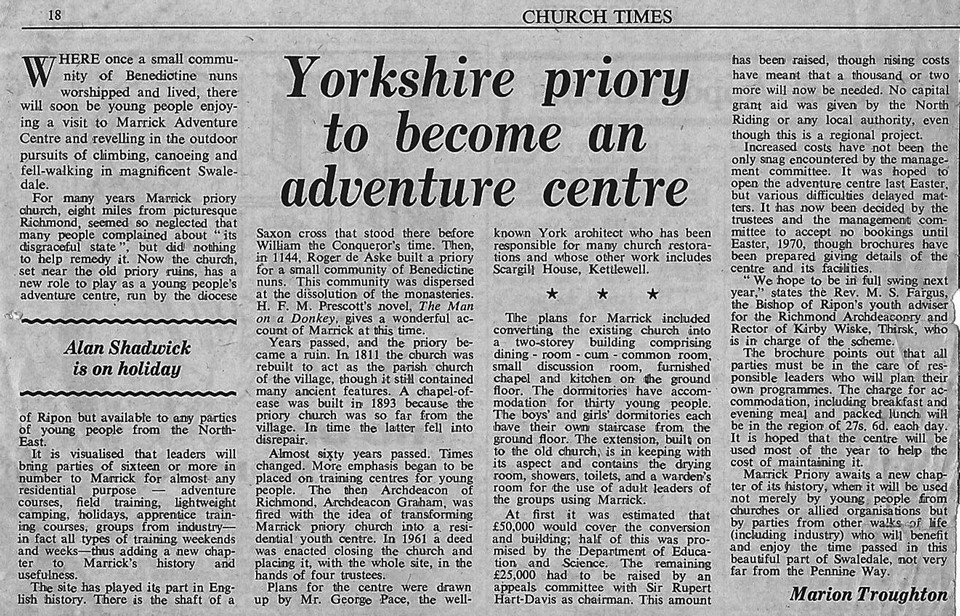