Where Benedictine nuns sang their prayers almost 1,000 years ago is now a youth centre which is the culmination of a 10-year dream for a group of Swaledale residents.

On the site of old Marrick Priory, near Richmond, parties of young people are now gathering for canoeing, climbing and potholing expeditions.

The centre is administered by trustees, among them the Lord Lieutenant of the North Riding, the Mayor of Richmond, the Archdeacon of Richmond and the Vicar of Grinton.

Prices have risen so fast while reconstruction and new building has been in progress that more than the original estimated cost of £25,000 is now required.

“The Department of Education and Science granted us £12,500 and we raised the rest,” said Sir Rupert Hart-Davis, of the Old Rectory, Marske, chairman of the project’s appeals committee. “Now we need still more money.”

The west end of the old church at Marrick has been reconstructed into a two-storey building, with a common room, refectory, and two dormitories. There is accommodation for 34 people, and both sexes can be accommodated in the building, simultaneously.

“It is a most wonderful idea” said the Rev, Frank Ledgar, Rector of Bedale St. Gregory’s and one of three leaders of a Bedale Youth Club group preparing to set out for a day’s sailing on Lake Semerwater, in neighbouring Raydale. A

Even for country dwellers like the Bedale boys, Marrick has much to offer.

“For instance” said group leader Ian Guthrie, a Bedale schoolteacher, “we live in an agricultural area where there is no access to the land around us. Here we have a river, a lake, mountains, moorland and vast open spaces to walk in. The boys are delighted.”

Potholing will be another experience new to the boys from Bedale, and an expert has volunteered to introduce them to. the wonders of the underworld.

“The centre has been carefully planned,” said Mr. Ledgar, “As the week progresses the boys seem to move naturally from the west end of the church to the east end, where we say evening prayers.”

In the east end of the church there are relics of the days when Benedictine nuns prayed in the same spot in an older building. The gravestones of some of the nuns are incorporated in the flag-stones.

“We are naturally anxious for the boys to sense the religious atmosphere of the building, but we don’t force it down their throats” said Mr. Ledgar. ‘“No one is compelled to take part in evening prayer. I should say about half attend on average”

Minimum age for attending the centre is 14. It is designed to provide accommodation for parties under their own leaders undertaking youth training projects, holidays, adventure courses and courses connected with the Duke of Edinburgh award.

“Parties from anywhere in Britain can apply for residence,” said Sir Rupert Hart-Davis. “All denominations are welcome. We have had substantial help from a number of trusts, and the North Riding County Council has offered a maintenance grant. But the money from parties staying here is our only self-supporting Income.”

The charge is 27s. 6d.a day, full board and accommodation. Three wardens, Elizabeth Heath (21), Robert Barker-Wyatt (19), and Christopher Tolley (19), are responsible for the running of the establishment and for catering and cleaning.

The three are spending their summer vacation from Ripon Teacher Training College, and get £5 each per week, plus free board.

“I’ve studied domestic science up to A level,” said Elizabeth; a Chapel Allerton, Leeds, girl who plans to start teaching at Potternewton this autumn. “But none of us has ever done anything like this before.” The young wardens are up before 7am. and rarely in bed before midnight. After breakfast (porridge, cereals, bacon and egg or sausage and tomato with toast and marmalade) the visitors set out with packed lunches.

“The groups we have had up to now have all been delighted,” said Sir Rupert. “They find it a big improvement on the adventure centres which provide one lavatory and a dormitory in a nissen hut.”

Said Warden Christopher Tolley: “Though still in the experimental stage the project is a great success. We’ve had no complaints from guests and we’ve found the work great fun.” 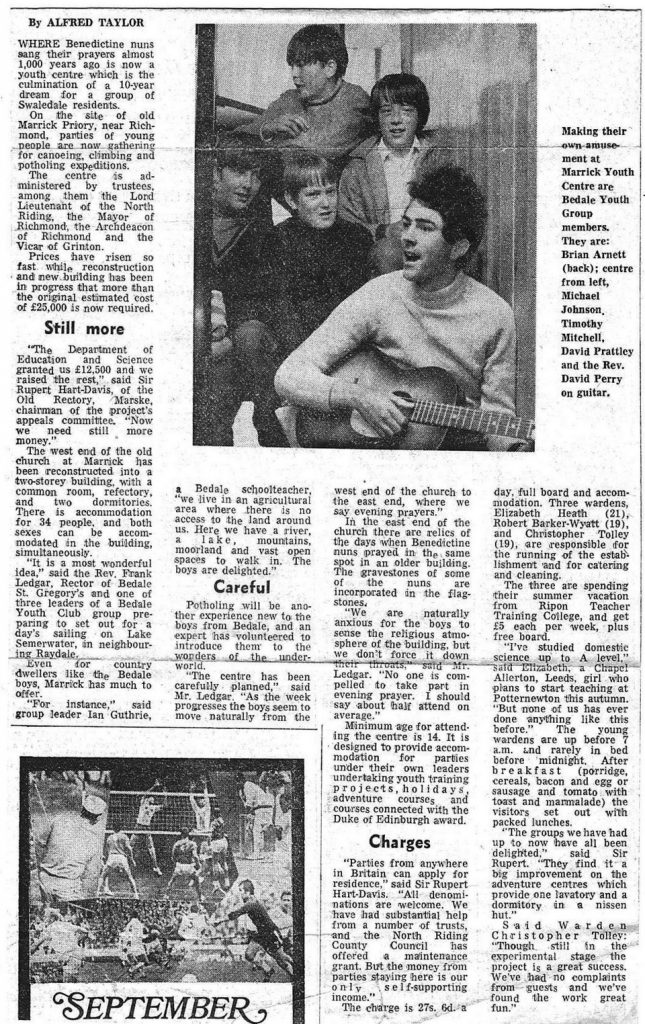